Edward S. Curtis was born in 1868 near Whitewater, Wisconsin and ended his formal education with the sixth grade. Soon thereafter he built his own camera and taught himself to expose and develop film and to make photographic prints. By age seventeen, Edward was working as an apprentice photographer in St. Paul, Minnesota. In 1898 a chance event radically altered the direction of Curtis’ life. During an extended season spent photographing on Mount Rainier, Curtis rescued a group of lost mountaineers. The party included several members who were nationally recognized for their work in the areas of conservation, Indian ethnography, publishing, among them, head of forestry, Gifford Pinchot, Chief of the U.S. Biological Survey, C. Hart Merriman, and naturalist, conservationist, and renowned Indian authority, George Bird Grinnell. Not only were they grateful, several became interested in Curtis’ photographic work. These contacts led to appointments to two important photographic expeditions. In 1900, Grinnell took Curtis to the Sun Dance ceremony of the Blackfeet tribe in Montana and instructed him in the systematic methods required for gathering scientifically valid information. Only weeks after his experiences with Grinnell, Curtis initiated his own expedition to photograph Indians in the southwest. APPROACH  |  In the field, Curtis documented “the twenty-five cardinal points,” to amass information on all areas of Indian life and lore, including vocabulary, political and social organization, religious customs, dwellings, food gathering and preparation, geography, games, music and dance, dress, weights and measures, and birth, marriage, and death customs. While Curtis could gather significant data on all these subjects, his most important contribution was in the areas of mythology and spirituality, fields in which many others had previously failed to gather information. Curtis often sent assistants ahead months in advance to supplement his extensive pre-field research. Only when Curtis felt sufficiently briefed by both his many assistants, led by W.E. Myers, and the leading Indian scholars, did he begin the actual fieldwork. This depth of understanding was critical to his success. NATIVE  SUPPORT  |  Curtis who was soon dubbed the “shadow-catcher.” Word passes from tribe to tribe. A tribe that I have visited and studied lets another tribe know that after the present generation has passed away men will know from this record what they were like, and what they did, and the second tribe doesn’t want to be left out. Tribes that I won’t reach for four or five years yet have sent word asking me to come and see them…there was old Black Eagle, an Assiniboin, ninety years old, who had all his life refused to talk about his nation to white men. At last, he became convinced that his tribe ought to get into the record, and he unbent, and he gave me a great amount of valuable information. FINANCIAL BACKING  |  While Curtis enjoyed great celebrity, his activities were not self-sustaining, and he was forced to borrow substantial sums to survive. Fortunately, among Curtis’ many friends and allies was President Theodore Roosevelt who provided Curtis with a letter of introduction to J.P. Morgan. Then one of the most powerful men in the world, Morgan was also a renounced bibliophile very active in producing elegant limited edition books on his various collections. At their meeting, Morgan summarily dismissed Curtis saying he could not take on any more commitments. Undaunted, Curtis asked that Morgan at least look at his photographs. Upon seeing the work, the usually intransigent Morgan agreed to underwrite the project for five years. 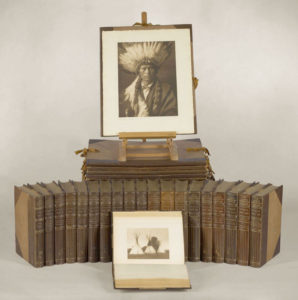 When Curtis and Morgan struck their deal, both men assumed a major publisher would take over the risks and responsibilities of publishing such a monumental project, leaving Curtis free to concentrate on the photography and ethnography. Unfortunately, publishing houses shied away from such an ambitious and capital-intensive undertaking, so Curtis agreed also to become chief administrator, fundraiser, and publisher. This was an enormous, backbreaking task. The substantial costs and demands of being in the field with assistants, interpreters, film and still cameras, and sound recording equipment paled in comparison to the cost of making the photogravure plates, pulling the limited-edition prints, and binding the books and portfolios. Each of these steps required more capital than all the field research combined. Curtis was forced to devote ever-increasing amounts of time to fundraising and publishing burdens, which greatly distracted him. SOUND RECORDINGS  |  Additionally, Curtis took on the daunting task of creating ten thousand Edison wax cylinder recordings of Indian language and music. The delicate wax cylinders were often rendered unusable by heat, dirt, excessive moisture, or a variety of other factors almost impossible to control in the field. Much of the information he could record was incorporated into the volumes. Many of the recordings still survive at the University of Indiana archives. They provide an invaluable record, particularly for American Indians, as they may be the only extant record of lost language, music, or family histories. CHALLENGES  |  By the end of 1908, Volumes 1 and 2 were completed. But the financial panic of 1907 had seriously impaired his sales efforts, and he managed to place far fewer than the five hundred sets thought necessary to make the project profitable. In fact, as late as 1930 Curtis had only managed to secure two hundred subscribers. His Herculean efforts to interest prospective purchasers were further hampered by a world war, dwindling interest in American Indians, and perhaps most importantly, the widely-held misperception that J.P. Morgan would pick up the financial slack whenever necessary. The lack of subscriptions created significant hardships not only for the project, but also for Curtis personally, whose work on The North American Indian was forgotten even before the project was completed. Having driven himself to the limit for thirty years, Curtis suffered a nervous and physical breakdown, and his whereabouts for the next two years are unknown. LATER YEARS  |  Upon his recovery, Curtis resumed some of his activities as a photographer and did film work in Hollywood. Yet despite great physical disabilities and hardships, he never lost his intellectual drive and curiosity. As late as 1949, in his early eighties, he was deeply involved in researching his new passion and hoped to write a book entitled “The Lure of Gold.” In 1950 he had even planned to join a major gold mining expedition to Brazil and the wild regions of the Amazon and the Andes. Unfortunately, the organizers of the expedition had a falling-out and the expedition was canceled. Curtis was crushed, a visit to the Amazon having been a life-long interest. Curtis’ physical condition further deteriorated and in the fall of 1952, at the age of eighty-four, he died of a heart attack. In its seventy-six-word obituary, The New York Times, while stating that Curtis was famous worldwide as an ethnographer. “The most ambitious enterprise in publishing since the production of the King James Bible.” —The New York Herald, 1907