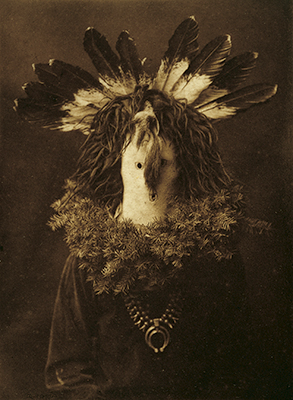 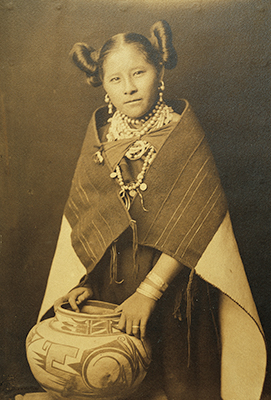 In the summer of 1900, Curtis made his first independent, self-financed trip into the field. For this important trip, he chose to photograph the Hopi, Navajo, and Apache of the Southwest.

From 1900 to 1925 Curtis would study and photograph the various tribes of the Southwest more frequently than those of any other area. He ultimately devoted more volumes of The North American Indian to the Southwest than to any other region. The Indians of the Southwest lived primarily in Arizona and New Mexico, although their presence extended into parts of Texas, California and northern Mexico. Because of the scarcity of native vegetation and game and the sporadic availability of water, the tribal peoples of the Southwest, by necessity, became largely dependent on agriculture for their subsistence. As their reliance on agriculture grew, the Indians of the Southwest adopted an increasingly village-oriented culture. In fact, some of their villages and pueblos have been inhabited continuously for hundred of years, making them among the oldest permanent settlements still in use in North America today.

One of the reasons Curtis was drawn to Southwest Indian tribes initially was that they afforded him an unusual glimpse into pre-white Indian life. In the early 1900s, many people still lived in traditional ways, strongly tied to their ancient culture and religious traditions. Curtis was also fascinated by the strong relationship Southwest Indians had with their ancestral land, which in both its physical and metaphysical manifestations was at the center of their history, tradition, and beliefs. Virtually all practices revolved around it.

Curtis’s immersion in the landscape and cultures of the Southwest Indian is clearly evident in the photographs he made in the region. These images, and the written records of the Southwest that Curtis produced over several decades, mirror his deep understanding of the unique geo-cultural interplay of people and place.