Hupa Female Shaman, 1923 … and when the last red man shall have perished, and the memory of my tribe shall become a myth among the white men, these shores will swarm with the invisible dead of my tribe; and when our children’s children think themselves alone in the ﬁeld, the store, the shop, upon the highway, or in the pathless woods, they will not be alone.— Chief Seattle 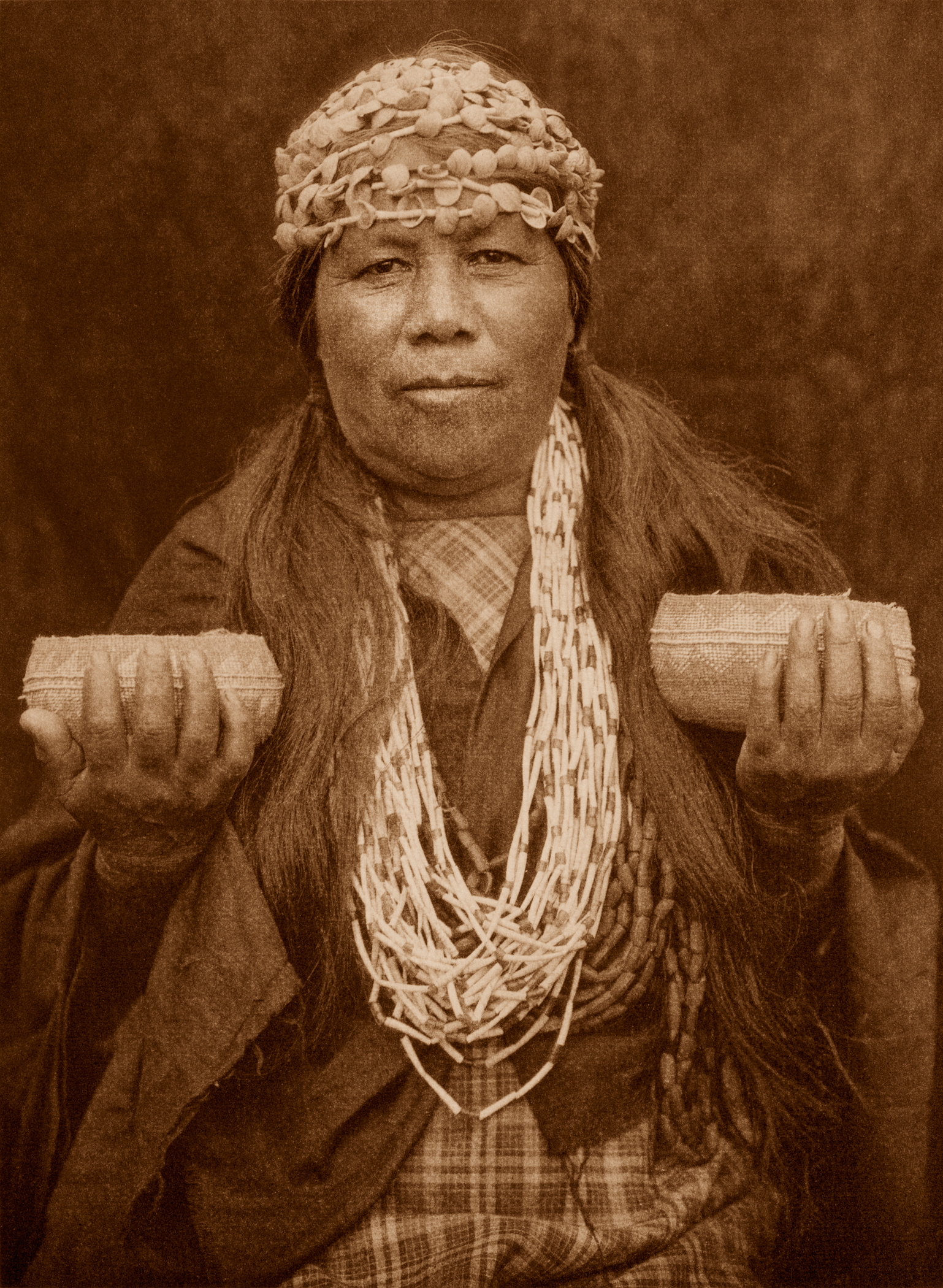 The Northwest Coast volumes of The North American Indian included tribes from Washington, British Columbia, and southeast Alaska. Curtis studied many of the Salishan tribes from the Washington Coast, including the Cowlitz, Quinault, and Upper and Lower Chehalis. Farther north, in British Columbia and southeast Alaska, he studied the Kwakiutl, Nootka, and Haida. The tribes of the Northwest Coast had the most elaborate and sophisticated material culture of any Curtis visited. He felt that of all the cultures he had encountered, the peoples and customs he found there were the least tainted by European inﬂuence.

Curtis was so fascinated by Northwest Coast cultures that he chose the region as the basis for a feature ﬁlm, the ﬁrst ever done on Native Americans. The ﬁlm, In the Land of the Headhunters, preceded Robert Flaherty’s famous Nanook of the North by a decade and was a ground-breaking contribution to the nascent ﬁeld of visual anthropology. Although Curtis’s 1914 ﬁlm was a critical success, it did not fare well at the box office. Rather than bolstering the funding for The North American Indian as he had hoped, the ﬁlm project actually put Curtis further in debt. 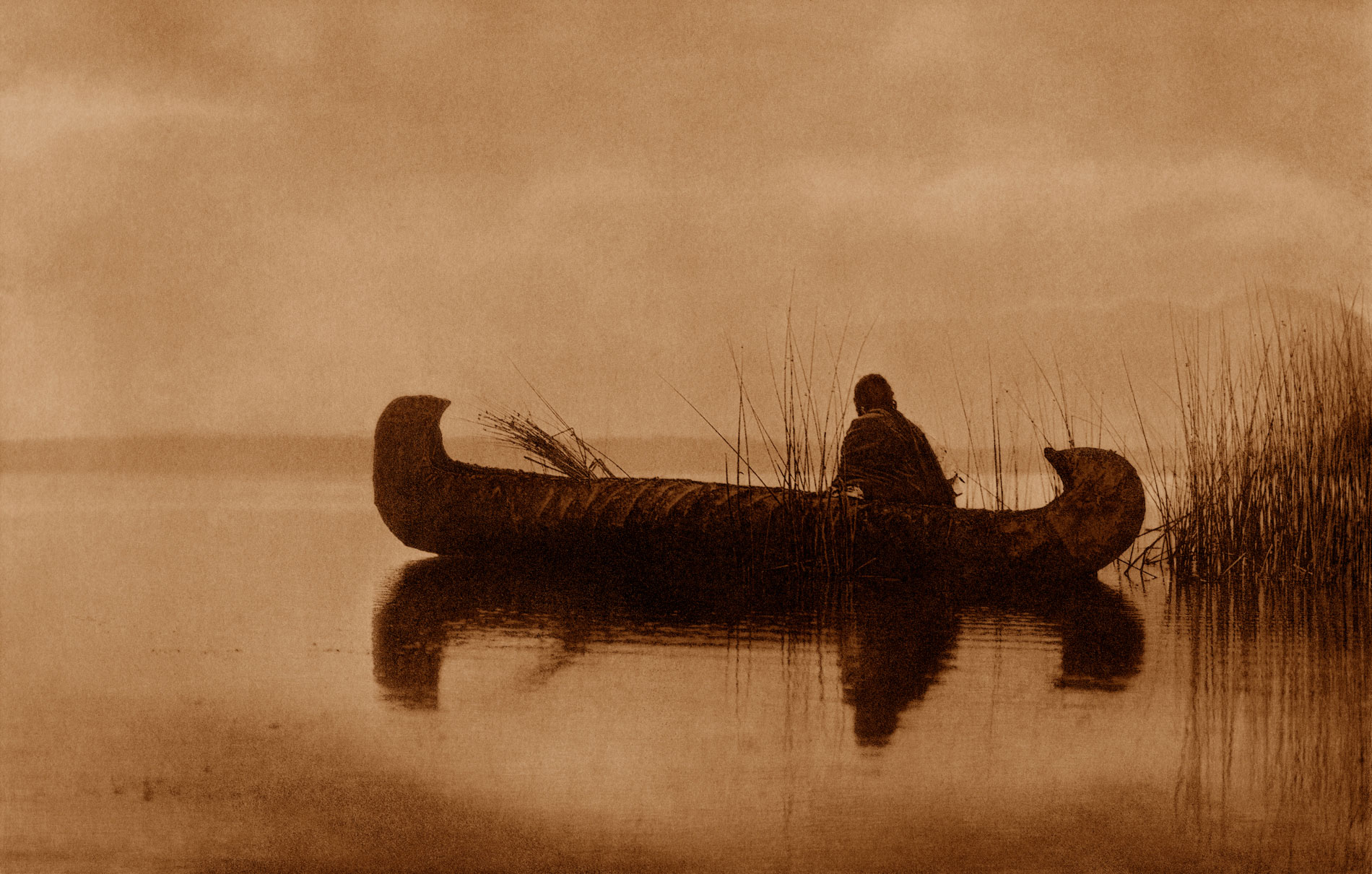 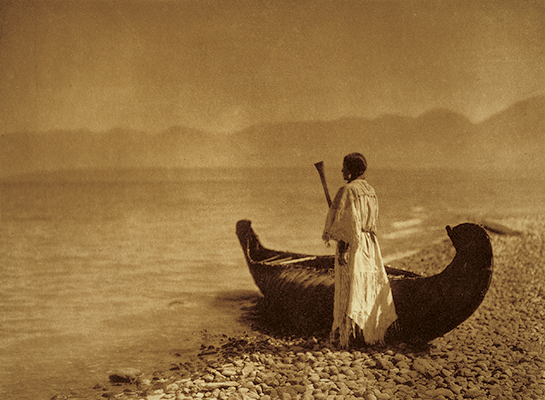 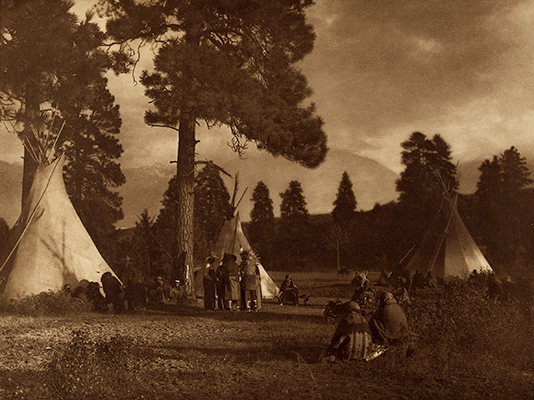 The topology and climate of the Northwest Coast were unique among the regions Curtis visited. Rugged mountains that often ran to the sea combined with high levels of precipitation to create lush, dense forests and numerous rivers and streams. The environment also yielded an extraordinary abundance of both food sources and raw materials for housing, clothing, and canoes—the basic necessities of life. This bounty, in addition to the dense vegetation and rugged terrain, meant that the tribes rarely ventured far inland. Concentrating their villages and their daily activities at or near coastal waters, Northwest Coast tribes relied heavily on ﬁshing for subsistence; they also hunted waterfowl and other game, including seal, bear, and elk. Various plants and roots that grew freely along the coast supplemented these primary food sources.

This wealth of natural resources reduced the demands on time and energy that native peoples had to devote to meeting subsistence needs. The Northwest Coast tribes were thus free to develop their material and ceremonial cultures to a degree that was matched by very few, if any, other tribes. For example, they developed carved objects such as masks and totem poles that are as spectacular as they are complex. Curtis was obviously fascinated by what he found along the Northwest Coast, and he documented the elaborate cultural systems with their many ceremonies and rituals as well as the intricate and complex material culture of many tribes in the region. 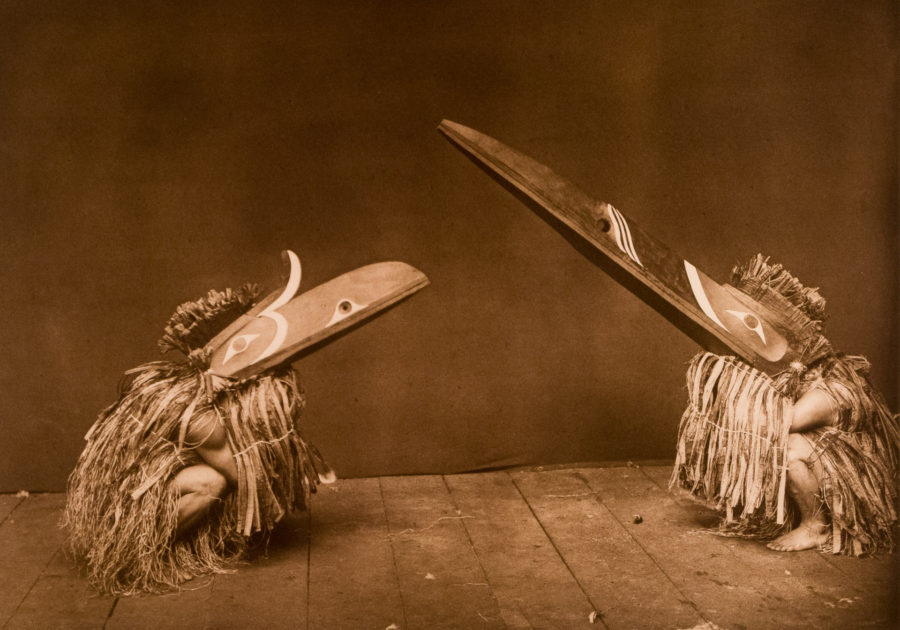 These hardy, sea-going people had developed the ceremonial life until it was a veritable pageant. It is, perhaps, safe to say that nowhere else in North America had the natives developed so far towards a distinctive drama.… No volume of the series has required an equal amount of labor in the collecting of data.… The pageant-like ceremonies of the life, their great canoes and ocean-shore homeland, have afforded rare material for pictures.1

During the winter months, when less outdoor work was undertaken, Northwest Coast Indians used the additional time to create the extraordinary carvings, weavings, and weaponry for which they are known. They placed these objects prominently throughout their beautifully constructed villages and their magniﬁcent wooden lodges. Their tradition of highly stylized and elaborate craftsmanship was also evident in the ancient regalia the tribes displayed and wore during ceremonial dances. Curtis made these observations about the Kwakiutl:

Their ceremonies are developed to a point which fully justiﬁes the word dramatic. They are rich in mythology and tradition. Their sea-going canoes possess the most beautiful lines.… In their development of ceremonial masks and costumes they are far in advance of any other group of North American Indians.

The potlatch was one of the most widespread, dramatic, and important ceremonies of the Northwest Coast and served a variety of religious and social purposes. Individual guests and entire tribes, from both neighboring and distant areas, attended these extraordinary ceremonies. Officially, the potlatch was performed to honor the dead, but a central part of the event involved the host giving gifts to his guests. A potlatch took enormous preparation, and people sometimes spent years acquiring the wealth necessary for the event. A host would work endlessly so he could present his most distinguished and honored guests with appropriate symbols of his generosity.

Northwest Coast societies were intensely attuned to hierarchical social standing, and the potlatch played a critical role in creating, affirming, or changing the social standing of both the host and guests. The generosity the host displayed could greatly enhance or diminish his social rank, as he presented gifts to his guests according to their established social standing and his personal relationship with them. Guests receiving unusually generous gifts became more esteemed; those receiving less signiﬁcant items might lose status in the eyes of others. By being so generous in his material dispensation, occasionally to the point of ﬁnancial ruin, the host sought to gain respect, admiration, and status; but he also expected to be similarly reimbursed at subsequent potlatches performed by others.

Despite the attention given to status, potlatches also served a ritual function. Many Northwest Coast Indians believed that once a spirit passed from the living it could only be happy, or taste life again, through human memory. Among the Cowichan of Vancouver Island the potlatch in honor of the dead assumes a form in which the deceased is represented as actually presiding over the celebration. The head of a family prepares effigies with rolled blankets and dresses them in the clothing of the deceased member or members of the family whom it is desired to honor.3 By remembering the dead and honoring them in living ceremonies such as the potlatch, the people believed the dead could receive what they most needed. The potlatch host anticipated his own need for human remembrance after death, and the gifts from the potlatches functioned to perpetuate the host’s own memory by serving as reminders of him and his generosity. 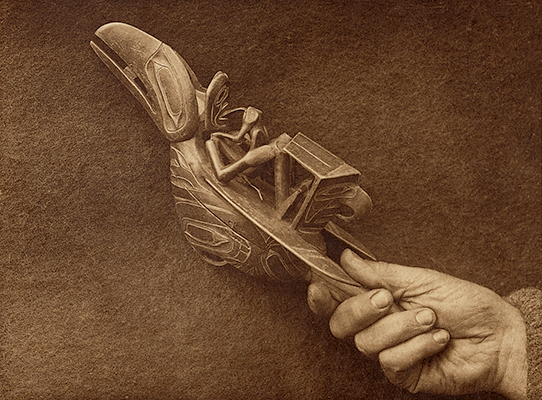 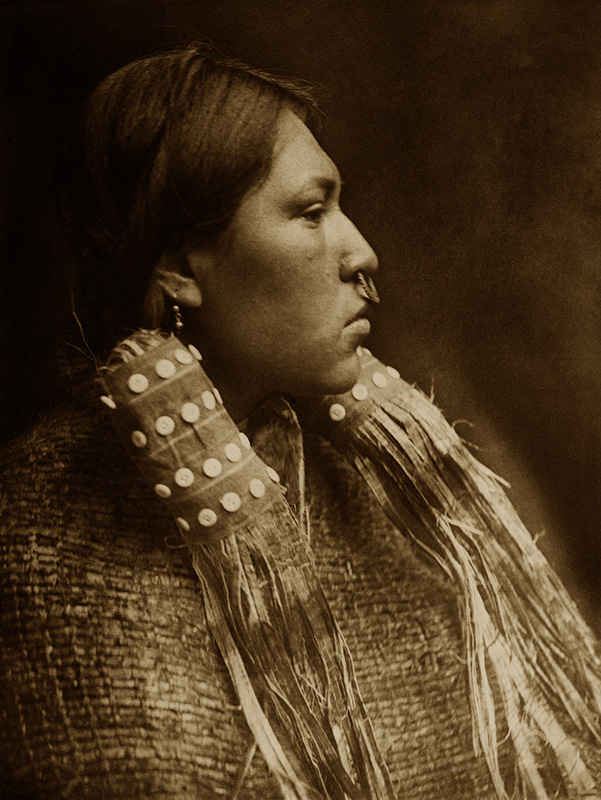 Northwest Coast tribes traced their ancestry through membership in clans and societies, and winter ceremonials provided a time for communities to gather to remember ancestors and tribal history. The characteristic gesture of the dancers is pointing the right foreﬁnger to the zenith as a reminder that their prototypes fell from the sky, and, as they perform, the spectators think reverently of their ancestors.4

During these ceremonies, people performed dances and songs and displayed their most important ceremonial objects. Masks, special blankets, tools, and weapons often carried representations of the animals, stories, or ﬁgures historically associated with groups to which individual participants belonged. Chilkat blankets, in particular, were magniﬁcent and intricate pieces of ceremonial regalia that were created with exceptional artisanship. They were woven with crests that represented the owner’s heritage and were usually fringed. When worn in ceremonial dances, the blankets’ crests and ﬁgures acquired an animate and symbolic life; through movement, the imagery on the blankets came to life and expressed and affirmed the clan’s identity and history.

Shamanism, a mystical practice that mediates between the worlds of spirits and the living, was a pivotal part of Northwest Coast culture. Shamans courted, controlled, and acquired power from spirits, and they were respected and feared as the most powerful members of the tribe. They performed rites to bless hunters and ensure their safety and success, but shamans were also healers. The people thought that when the uninitiated or untrained had contact with the spirits, or with places or objects of great power, the result could be physical or spiritual harm. They also believed that evil spirits were the cause of sickness. The power shamans received from spiritual and supernatural helpers largely determined their effectiveness in curing illness, and they received compensation when a patient was successfully helped or healed.

Thus, a certain Clallam man, already in his prime, was traveling about in search of supernatural power, and one day as he approached a pond he saw an enormous cloud of mosquitoes hovering over the water and darkening the sun.… It occurred to him that this might be the manifestation of some spirit, and he went forward.… Instantly the mosquitoes covered his body.… Gradually he revived, and he made his way home, certain that he had been granted the power to draw blood with his lips from the bodies of the sick and thus expel disease.5

Shamans were also capable of using their powers for harm. Sometimes a shaman would be blamed for the illness of an individual. Occasionally, rival shamans battled or dueled one another, which could have fatal results.

Curtis’s ﬁeldwork for The North American Indian came to a close during the summer of 1927, when he spent the season with the Eskimos of subarctic and arctic Alaska. Curtis had ﬁrst traveled to Alaska in 1899. When railroad magnate and amateur explorer E. H. Harriman organized an expedition of scientists, naturalists, and friends to study and explore the still-remote Alaskan territory, Curtis was invited to be one of the expedition’s two photographers. It was on this trip that Curtis met George Bird Grinnell, and the friendship they formed in Alaska led directly to Curtis’s watershed experience on the Great Plains of Montana less than a year later.

Below the Arctic Circle, the Eskimos of King Island, Little Diomede Island, and Cape Prince of Wales hunted throughout western Alaska, from Bristol Bay to Norton Sound and across the Seward Peninsula. Above the Arctic Circle, the Nakoaktok and Kobuk lived and hunted from Cape Lisburne to Camden Bay. Eskimos rarely settled inland, almost always inhabiting permanent coastal and island villages.

The Eskimos, of necessity, were seafaring peoples, constructing hand-powered kayaks and canoes to hunt at sea. Seals, walrus, and whales were tremendous resources and provided important sources of fat, bones, meat, and organs. Throughout the region, the people dried, smoked, and cured sea mammals to be stored and used as food during the winter. The hunt for these animals was dangerous but thrilling and rewarding. Only the most adept hunters could safely pilot their vessels through the arctic waters and ice ﬂows to secure food.

Curtis noted that the distinguishing characteristic of these peoples was their adaptability, for they would not have survived in, much less settled in, an area of such severe climate if they were not. Their sophisticated ability to cure and work skins into parkas, boots, and mittens was unparalleled anywhere in North America. The Eskimos were also brilliant makers of equipment, since hunting was an unforgiving pursuit in arctic and subarctic conditions; their kayaks, ﬁshing hooks, spears, and traps were all ingeniously contrived and the hunting weaponry exceptionally deadly.

In many ways, Curtis’s return to Alaska provided a ﬁtting end to The North American Indian. It brought a sense of closure to the project, but it also must have helped him put his thirty-year odyssey into perspective. As he stated in the introduction to volume twenty

Great is the satisfaction the writer enjoys when he can at last say to all those whose faith has been unbounded, “It is ﬁnished.”