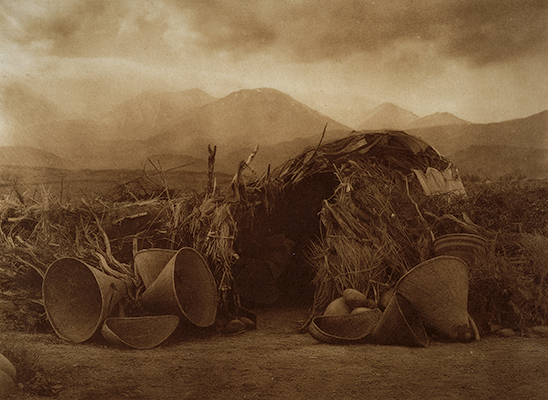 The rich history and diverse cultural heritage of the California Indians have never been widely known outside the state. Today, even within California, they are still little understood. The tribes of the region tended to be small and, while the groups interacted socially and economically, they did not have the strong political organization of many Native American groups in other parts of the continent. Before the devastating incursions of Europeans and Americans that began in the eighteenth century, there were hundreds of tribal villages in this region, each generally with a few hundred to a thousand residents. By the time Curtis reached California in 1916, he often traveled by automobile rather than train, horseback, or on foot, but the convenience of the car did little to make his work easier. Many of the tribes that survived the incursions of white settlers, especially the inﬂux during the Gold Rush era, sought refuge in the remote and inaccessible hills and arroyos throughout the region. The devastation suffered by these tribes was extraordinary, and it is estimated that the total population had been reduced from several hundred thousand before the arrival of the Spanish to some twenty thousand. Curtis’s efforts were hindered by the Indians’ wariness of whites and their physical isolation and were compounded by the linguistic differences among the splintered tribes. The numerous distinct languages and dialects he encountered made translation a continual challenge. Nevertheless, he was able to gain the trust of many tribes.

For the purposes of The North American Indian, Curtis divided California Indian cultures into three broad regions: northern, central, and what he called desert west. Though somewhat arbitrary, these divisions have been retained here for consistency. The territory the California Indians inhabited actually extended well beyond the present state borders. The climate of the northern and central regions was similar in many ways, but the arid desert west was distinctly different. These vast climatic and geographic differences were reﬂected in the varied lifestyles and cultures of the California tribes.

During the several years Curtis spent doing ﬁeldwork in California, he lived with and studied more than ﬁfteen northern and central California tribes and six tribes from the desert west. Curtis delicately pieced together a coherent ethnographic study from many sources, and the three volumes and portfolios of The North American Indian dedicated to the California Indians give us an excellent understanding of these tribes and their histories.

Tribes of the desert west inhabited some of the most arid territory in the United States, extending from the Mojave Desert to west-central Nevada, and included the Cahuilla, Diegueños, Pavisto, and Chemehuevi. They migrated with the seasons, moving from barren mesas, desert lakes, and dry canyons to the more hospitable mountainside forests of the Sierra Nevada. The tribes of the desert west moved in familial bands between seasonal camps to harvest resources that became available in different areas at different times of the year. They foraged nuts, seeds, and roots; hunted small game and birds; and ﬁshed. Although their material culture was limited by their need for travel, the severity of their environment, and the scarcity of natural resources, these tribes possessed a rich spiritual culture with strong mythological and religious traditions.

The northern and central California Indian tribes enjoyed a more temperate climate than those of the desert west. Tribes in the central region, among them the Pomo, Wintun, and Yokut, tended to settle in coastal areas or along inland waterways, where food was readily available and abundant. Northern tribes, including the Hupa and Yurok, also lived on the coast or near inland rivers in northern California. Some tribes, such as the Klamath, settled as far north as Oregon. The abundance of resources in these regions allowed the northern and central tribes to settle in relatively permanent villages, which tended to be small and isolated. Wooden plank dwellings provided the principal source of shelter, and the people subsisted primarily on the abundant supply of ﬁsh and seasonal harvests of fruits and vegetables.

The reduced pressure for subsistence made it possible for the northern and central California Indians to develop a more elaborate and complex social and material culture than their desert neighbors. They were skilled basket makers; in particular, Curtis spoke of the Pomo women as the most skilled basket makers in North America, and he photographed California basketry more extensively than that of any other area.

Tribes of these regions also created intricate ceremonial regalia and fashioned other artifacts of wealth. They had an elaborate system of assigning speciﬁc values to various items that they bought, sold, and traded as currency. This currency system held particular importance in California Indian culture, as material wealth was the primary determinant of an individual’s stature. The Indians believed objects of extraordinary wealth possessed an element of spirit, and especially sacred were regalia and obsidian blades. Obtaining wealth and maintaining the status it brought were central to California Indian thought and consciousness, and individuals undertook mental and spiritual preparations for attaining wealth that were similar to the dreaming or visioning found in other Native American cultures.

Wealth was the indispensable foundation of chiefship, or rather, chiefship inevitably followed the possession of wealth. The rich men did no labor, such as driving deer or building ﬁsh-weirs, but spent their time in the house making arrows and ceremonial costumes, which they sold at high prices.

Ceremonies, feasts, and dances could only be held with the inclusion of ceremonial regalia owned by wealthy individuals. Among the most precious of the highly valued ceremonial regalia were headdresses and costumes made with red woodpecker scalps and white deerskins. Assembling the hundreds of scalps and several skins that some pieces required was difficult and tedious work, but the effect was striking. When used in public ceremonies, the pieces were dazzling; the Indians prized them for their rarity and beauty as much as for the great wealth they symbolized.

Equally rare and valuable were the large, oblong obsidian blades so prized by these tribes. A blade’s desirability depended on its size, craftsmanship, and color. In general, larger blades were worth more, and some were several feet in length. They were red, black, or green, red being the most precious. The more perfect and regular the blade’s shape and detail, the greater its value; artisans carefully and deliberately chipped each one into an oblong form. Rarely displayed, the blades were usually seen in public only during feasts or dances.

California Indians had little, if any, inter-tribal political organization; similarly, within individual tribes, social cohesion was loose and informal. This tribal structure, coupled with a general absence of either a history of or an instinct for warfare, made these tribes especially vulnerable to the white incursions. Curtis wrote about the devastation he witnessed ﬁrsthand.

While it is not the purpose of these volumes to dwell on the wrongs [done to] the Indians, in the present instance it is impossible to avoid this distressing subject entirely.… The conditions are still so acute that, after spending many months among these scattered groups of Indians, the author ﬁnds it difficult to even mention the subject with calmness.2

It is not mere coincidence then that the great Ghost Dance religion of the 1880s found ready acceptance among California Indians. The Ghost Dance was the most signiﬁcant and widespread of the Native American revitalization movements that emerged in the eighteenth and nineteenth centuries, and the all-pervasive devastation the California tribes suffered played a crucial role in the importance of the Ghost Dance in the region. Even though the American government began suppressing the Ghost Dance in the early 1890s, its lasting signiﬁcance is evidenced by Curtis’s record of its continuing inﬂuence several decades later. Not only did it prevail in various California tribes, but also in tribes as distant as the Sioux in the Great Plains and the Cheyenne in the southern Plains.

Although it was originally established in the 1870s, interest in the Ghost Dance was rekindled in the 1880s through a Paiute Indian prophet named Wovoka, and it quickly spread among Indians of the western United States. About 1888 [Wovoka] announced that he had received a revelation promising a complete change of conditions, the elimination of the white race, the recovery of the Indian land in all its former abundance of buffalo, the return of the dead. In short, a new world was imminent, and the people must prepare for it by appropriate dancing.3

Wovoka traveled extensively, preaching and performing miracles; his teachings spread to distant tribes through messengers, travelers, and apostles. For many Indians, the Ghost Dance brought a much-needed message of hope and a chance for cultural and spiritual renewal. The great popularity of the Ghost Dance and the widespread uprising it triggered caused a powerful backlash from the whites. Memories of the Ghost Dance were still fresh at the time Curtis visited the California Indians in the early 1900s. His photographs indicate an acute awareness of the impact its suppression had on their culture. Most of the traditional costumes are gone; a sense of defeat and resignation can be seen in some of the images. While his portraits from this region may seem less dramatic, they possess a rare power and a quiet, subtle beauty that clearly reﬂect the life Curtis encountered among these people.
—Christopher Cardozo with Darren Quintenz