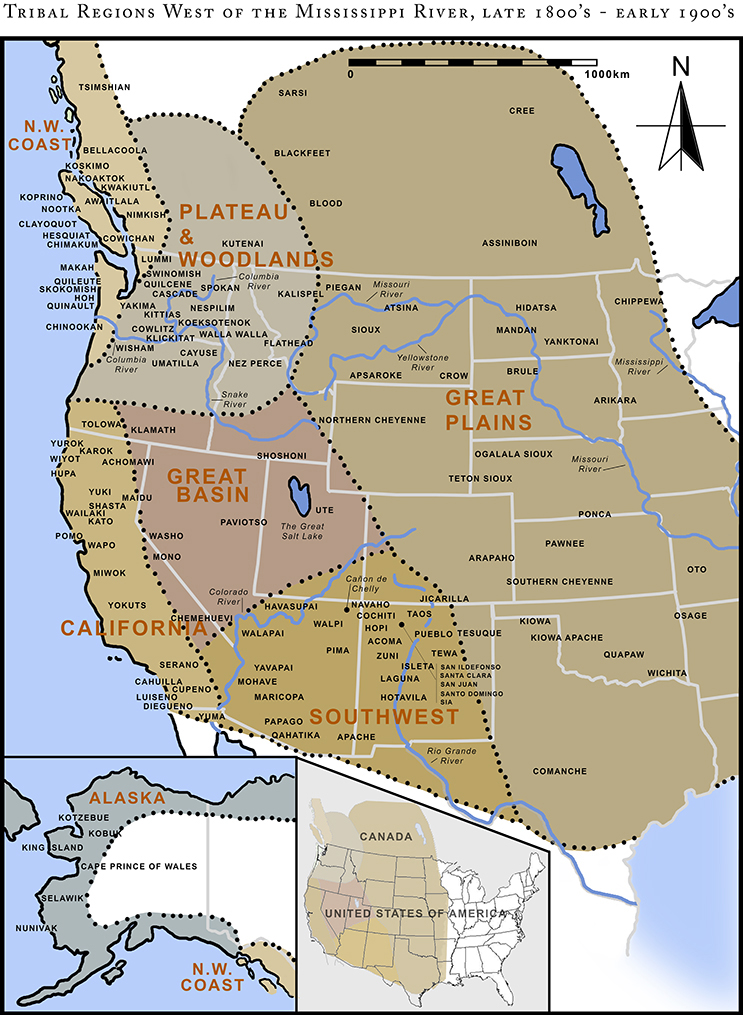 Lifestyles and practices varied among the geographic regions of North America in the centuries before the European settlers arrived. The tribes of California lived in a variety of climates, and their daily activities in different areas reﬂected the diverse geography of their territory. Throughout California, men usually hunted and ﬁshed, and women harvested wild plants and small game. Tribes in the northwest region of California depended on salmon, but in the central region the major source of food was acorns, which were harvested in the fall. The acorns were processed into ﬂour and then stored for later use. In the southern region, the Chumash made large plank canoes that allowed them to hunt sea mammals such as the sea lion, which was highly regarded for its meat and oil. The Tolowa people performed a ceremony when they hunted the ﬁrst sea lion of the season. Similar to hunting ceremonies of other tribes throughout the country, the Tolowas’ ceremony paid homage to the animal for giving its life to the people in order for the people to survive. Most California tribes maintained one central village surrounded by settlements. People from the settlements would visit the village for ceremonial, social, or economic reasons, and villagers ventured into surrounding territories in search of food resources or to visit the settlement dwellers. The families usually arranged marriages between their children because marriage created economic and social ties with another group. The families of those to be married would typically exchange goods, and the wife would move to the husband’s village, where she learned the traditions of her new village from her mother-in-law. Most Plains Indian tribes pursued a nomadic lifestyle to follow the buffalo herds, their primary source of subsistence. Because of this, all their possessions had to be portable, small enough to be mounted on a travois pulled by a horse.
Men and women were equally powerful and respected in traditional Plains Indian life, each gender possessing important skills critical to the well being of the community. Early Plains Indian men are often stereotyped as having been avid warriors, but battle occupied only a small portion of their lives. One of their primary responsibilities was hunting. Small groups of hunters would leave camp on horseback to look for the buffalo herd. Not unlike Plains Indian men of today, male ancestors also had responsibilities to their children, their elders, and their community. Women were responsible for preparing and storing foodstuffs and creating clothing. The woman-owned the tipi the family occupied. Women also played an important role in the spirit life of the family. Even though men and women had diffierent responsibilities, each gender was equally respected in the community. Men could excel at hunting and warfare and be recognized for their exploits, but women who excelled at creating beautiful utilitarian objects were also acknowledged for their work. Each Plains Indian tribe comprised septic societies, groups of people who shared a common experience or talent. For the men, some societies were based on battle exploits, others on religious experiences. When a young man wanted to join a military society, he either had to be invited or had to petition to join. Young men often accompanied warriors, acting as “support.” They would bring water to the warriors, carry their goods, or hold their horses. Once a young man became part of a military society, he was required to uphold its rules and regulations. Some societies had strict guidelines of behavior. For instance, in battle, particular clothing had to be worn and a member was never to leave a comrade alone. In some societies, warriors were allowed to go into battle protected only by a knife. The success of a society member was due in large part to his spiritual conviction. Society training helped young men to mature and to become responsible to their tribes and families. Many women’s societies were based on artistic skills. Among the Cheyenne and Lakota, there were quillworker societies that taught young women the sacred art of adorning objects with porcupine quills. As in male societies, aspirants either had to be invited or petition to join. They would offer gifts to the members or sponsor a banquet to demonstrate their sincerity. Only when they were inducted were they taught the artistic skills and the meaning of sacred designs. After beads were introduced, many quillworking societies adapted their techniques while continuing their artistic traditions. The Woodlands people lived in a climate where they enjoyed an abundance of water, game, and forest resources. Their lifestyle centered on the cycle of the seasons. In winter, the most difficult time of the year, men hunted and trapped wild game for food, clothing, and trade, while the women cared for their homes, made and decorated clothing, and prepared food. Spring was the time to ready the garden for planting squash, corn, and pumpkins. Maple trees were tapped for their sap, which was heated to make maple sugar. Summer activities included maintaining the garden, berry gathering, and ﬁshing. In the fall, the garden was harvested and wild rice collected from the shallows of the lake areas. Typically, Woodlands people harvested wild rice by positioning their canoe under the rice stalks and gently bending the stalks over the side rail, hitting them so the rice fell into the bottom of the canoe. The wild rice was then aged, parched, hulled, and cleaned for storage. The Woodlands people lived in wigwams and longhouses. Both structures were made from a framework of young trees that was covered with bark and thatch. Wigwams were dome-shaped and longhouses were extended rectangles. A longhouse had a central hall running the length of the interior, with separate rooms ﬁtted with sleeping platforms on each side. Several related families would live in a longhouse, an arrangement that fostered community and kinship. —Joseph D. Horse Capture
The Great Plains Region
Pacific Northwest & Alaska
The Southwest Region
Plateau and Woodlands Region
The State of California